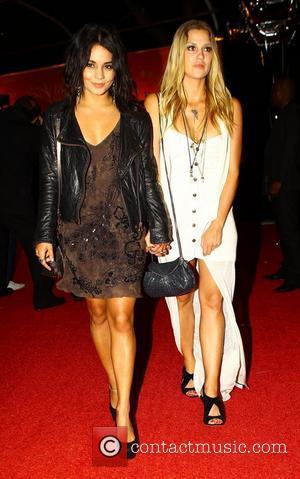 Vanessa Hudgens, the American actress and star of 'Sucker Punch', is featured in her second campaign for Candie's clothing brand. Hudgens was first announced as the new face of the line in January and spoke to People Magazine about her fashion role models at the shoot.
When quizzed on her own personal style, Vanessa noted, "I'm extremely inspired by the '60s and '70s. I adore Bianca Jagger and Cher". Hudgens was asked whether she favours conservative or edgy fashions, to which she replied, "Depends on the occasion. That's why I love Candie's. You can rock it out or be a pink princess". The actress's campaign will debut in national magazines from this fall, and merchandise will be available exclusively at Kohl's. Despite being considered a fashion icon herself, Hudgens claims she admires the style of her contemporaries, saying, "I think Miley (Cyrus) has amazing style. Mary-Kate and Ashley Olsen. Ashley Tisdale of course . Blake Lively. They all play with fashion and have fun with it!" The latest campaign features the young actress shopping, reading and ironing her clothes.
Vanessa Hudgens is currently shooting the forthcoming drama movie 'Gimmie Shelter', about a pregnant teenager who is turned away by her Wall Street father because of her decision to keep the baby. The film is being directed by Ron Krauss and also stars Brendan Fraser and JOSEPH FERRANTE.