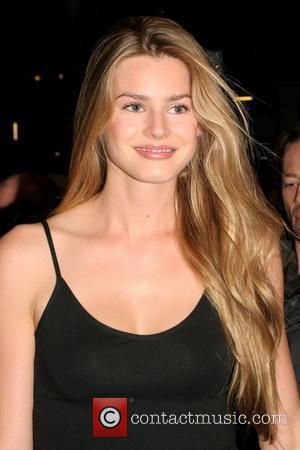 Italian-American model Vanessa Hessler has been fired from an ad campaign after revealing her "passionate" relationship with Mutassim Gaddafi - the son of Libyan dictator Muammar Gaddafi.
According to the UK's Daily Mail, the glamorous model has been fired from her lucrative role as the face of a telecommunications company. The 23-year-old was speaking to the Italian magazine Diva e Donna when she claimed to have dated Mutassim for around four years, calling their relationship, "a beautiful love story". The 34-year-old died with his father outside of Sirte on 21st October 2011, bringing to an end the family's brutal and murderous regime. The blonde model, who has worked the likes of Georgio Armani, Calvin Klein and L'Oreal, said, "I didn't have any contact with him since the uprising broke out, but our relationship was one of passion". Perhaps more controversially, she added, "We, France and the United Kingdom, financed the rebels but people don't know what they are doing.The Gaddafi family is not how they are being depicted, they are normal people".
Hessler's former boyfriend died a violent and bloody end at the hands of Libyan rebels last month. Although conflicting accounts describe his murder, he and his father are understood to have tried to escape the city before being captured.