'Dig Down Deep' is the new single from alternative folk project Vandaveer, from their third studio album of the same name.

Washington DC-based Vandaveer was formed in 2007 as a solo side project by Mark Charles Heidinger whilst living in Ohio, where he released debut album "Grace and Speed". In the same year, he relocated to Washington where he was met Rose Guerin. The two were part of DC's Federal Reserve collective, a group of musicians performing monthly gigs throughout the capital.

Since then Vandaveer have played nearly 500 shows both in the US and Europe - where they are popular, especially in France - including Glastonbury in 2008. Also in 2008, they were featured in "Vincent Moon's La Blogotheque", a series of "live music encounters". Their second album, "Divide & Conquer", was released in 2009, with their dedicated fan base growing steadily.

According to their website, Vandaveer's latest album "offers a collage of churning rhythms, steady guitar and ringing piano beneath tales of war and impermanence, loss and love." 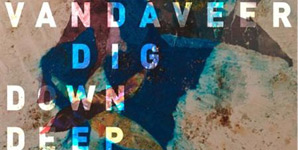