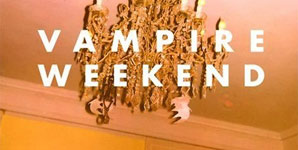 This lively and spirited debut from Vampire Weekend is a breath of fresh, impassioned air in a sea of identikit, moronic indie boy bands, all thrashing away in their pork pie hats, oblivious to the fact that we've heard it all before a thousand times and we're tired of the same old boy-meets-girl Hollyoaks background music.

Mixing coarse English language colloquialisms with references to almost every corner of the world and layering their accompanying harmonies over 1980's style African rhythms, Vampire Weekend draws obvious reference to Paul Simon's Graceland but there's something in the lyrical quality that brings the album to life, draws you in and drags you along in the carnival trail, like a pied piper, into the 21st century, with it's syncopated synthesisers and vicious string accompaniment.

Cynical critics have already been side-swiping at the educational curriculum vitae of these Columbia University graduate band members and a broad learning is clearly evident in the lyrics. Frankly, when you have lines such as "No excuse to be so callous / Dress yourself in bleeding madras / Charm your way across the Khyber Pass" then who's complaining?

Vampire Weekend is a rare triumph in that it is both cerebrally and emotionally stimulating. It's dance music in the purest sense. Images of carnivals and late night drinking parties on summer lawns, Glastonbury Festival when it used be a real festival skit and skip through your mind, feet tapping away, yearning for sunshine and warmth. This is musical soul food, passionate and care-free.