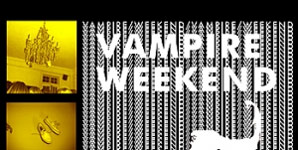 It seems the new thing to do now, that you release some material on a small record label, get spotted and then re-release some of that stuff. In some instances this is quite annoying (only to the people that have gone out and purchased this the first time round). In this instance however it is probably worth re-releasing because not many people have had the chance to hear this infamous track to come from Vampire Weekend.

So 'Cape Cod Kwassa Kwassa' is the new release which was part of a double A-side that was released last year. Vampire Weekend have accidentally transported Paul Simon's music into this side of the millennium. If you didn't know any better you would be sat in a pub saying "I like this new Paul Simon track, he keeps up with the times" Well consider yourself corrected here and now because this is Vampire Weekend with their fresh sound and believe this really is a fresh sound.

On the back of this would anyone be surprised if Paul Simon knocked up a Greatest Hits album?