Actress Valerie Harper Is "Resting Comfortably" In A Maine Hospital After Suffering A Health Scare Before A Stage Performance On Wednesday Night (29jul15). 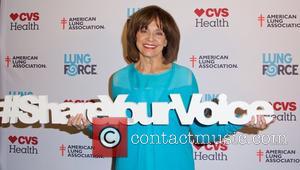 The Mary Tyler Moore Show star, who was diagnosed with terminal brain cancer in 2013, began feeling ill as she prepared for the Ogunquit Playhouse's production of Nice Work If You Can Get It and was taken by ambulance to York Hospital as a precaution.

A theatre representative has since assured fans the 75 year old is OK, stating in a press release she "is resting comfortably and will remain in the hospital for observation for the time being".

The play's executive artistic producer, Bradford T. Kenney, adds, "The audiences and all of us here at the Playhouse are greatly enjoying our time with Valerie here in Ogunquit, and we are encouraged that she is feeling better."

Harper, who also previously battled lung cancer in 2009, recently admitted she had come to terms with dying, telling People.com, "I'm ready to go. Maybe that's the secret... I don't want to, my God, I want to live to be 102. But I am not banking on anything, really, because we shouldn't. We don't know what's around the corner. I think you just take each day and get the best out of it and do what you can and have fun."