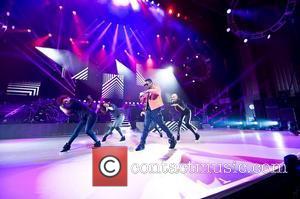 A family friend of Usher is the man being questioned over the terrible jet-ski incident that has left the pop star's step-son brain-dead. As was widely reported, 11 year-old Kyle Glover was struck by a jet-ski as he paddled around Lake Lanier in Atlanta, Georgia in an inner tube and is now brain-dead, leaving Usher and his ex-wife Tameka Foster devastated.
The man who was driving thejet-ski has now been confirmed as Jeffrey S. Hubbard from Atlanta. Explaining the incident, Sgt. Mike Burgamy of the Georgia Department of Natural Resources explained "Basically, a pontoon was pulling two juveniles on an inner tube, and the watercraft ran over the top of them."
The event was witnessed by two rangers. They do not believe that alcohol was a factor, whilst the investigators are also set to rule out a mechanical malfunction. There were two victims, the other being an as yet unidentified 15 year-old girl. Upon hearing news of the tragedy, Usher chartered a plane to Atlanta so that he could be with his ex-wife Foster. The pair had split up under acrimonious circumstances back in 2009 with their divorce being finalized later that year, however they've put that aside to come together at the bedside of Glover who, sadly, isn't looking too promising at all.