Stars Including Usher, Pharrell Williams And Comedian Kevin Hart Have Teamed Up To Provide 20 Disadvantaged Students With Scholarships Worth More Than $500,000 (£312,500). 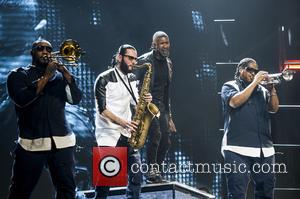 Actor Anthony Anderson, rapper Big Sean, singer Toni Braxton and basketball ace Chris Paul were also among those who contributed to the collective pot via their charity foundations, in collaboration with officials at the United Negro College Fund, to help youngsters pursue their higher education.

Usher, Williams, Hart and Paul each filmed footage surprising lucky students with scholarships for the UNCF's 36th annual An Evening of Stars, while event host Anderson presented $25,000 (£15,625) to four youths attending historically black colleges and universities during the gala, which took place in Washington, D.C. earlier this month (Apr15).

He also joined forces with New Edition star Ronnie DeVoe to help pay off one graduate's student loan debt, which amounted to more than $11,000 (£6,875).

Anderson, who benefited from a partial scholarship when he was a student at Howard University, tells the Associated Press, "My parents couldn't afford sending me to school, so I understand firsthand. We're here to help alleviate the burden off their shoulders. Students won't have to worry about their next meal, or pay for next semester or housing. The only thing they have to do is open a book and study."

The event, which also featured a performance from Big Sean, who hit the stage with the Miles College Choir for a rendition of his single One Man Can Change the World, will be broadcast in the U.S. on Sunday night (26Apr15).