The video for Droplet Affection was directed and produced by Racked Films and has extensive use of UV paint: the band are in UV makeup; a prop head is covered in orange paint, while UV paint is splattered on drums and poured into glasses.

Ursa Minor (Little Bear) formed in 2010 and comprises: Little Bear, Yoshee, Alex and Evee. A remix of Droplet Affection by Robert Owens is soon to be released; the band are also planning collaborations with Jozif and Mikill Pane in the near future. They have also supported Alex Metric recently and are set to perform at festivals throughout 2012. Ursa Minor (Little Bear) are definitely one to watch.

They have said that they are influenced by the 'golden age of House music', such as: Ten City; Billy Ray Martin and Fingers Inc.

Frontwoman Little Bear says of the track: "Droplet Affection was written about the person in my life who, with just one small expression of affection, reminds me that I am never alone in the world. It's a love song but not romantic love. It's about timeless, unconditional, unwavering love. We wanted the song to soundlike the feeling you get from thinking about that person in you life. It's emotional & intense." 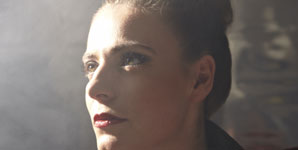