Uriah Heep star Trevor Bolder is facing surgery in a bid to end the pain of a mysterious ailment.

The British bassist faces several months of recuperation, which has prompted his bandmates to seek out a replacement.

A statement from the group reads: "Trevor Bolder is going into hospital for an operation which will require several months' recuperation. Everyone connected with Uriah Heep wishes Trevor a speedy operation and recovery, and Trevor's wishes are that the band should carry on without him, until he is fit and ready to come back.

"Venerated bass player John Jowitt has agreed to deputise for Trevor at short notice, to ensure that the band's show in Israel at the end of January can still go ahead... We know all of you out there will support Trevor and the band as we move forward together into 2013.

"Trevor will use his recuperation period to write songs for the new Uriah Heep album, the follow-up to Into The Wild, which will be put together in the next 12 months."

And Jowitt hopes he can do the star justice, adding, "I have long been an admirer of Trevor Bolder's iconic playing, and it is a huge honour to be asked to stand in for one of the all-time greats of the bass. I intend to bring due respect to the legend that is Uriah Heep, and I hope I can do justice to Trevor's presence, both on and off stage." 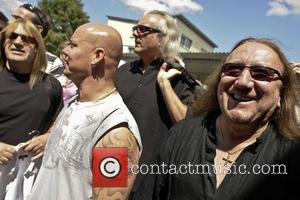