Under The Influence Of Giants - Mama's Room Audio Stream 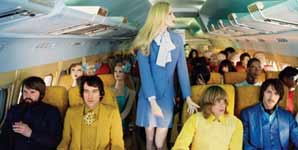 Artist: Under The Influence Of Giants
Song title: Mama's Room

Under The Influence Of Giants
Mama's Room
Audio Stream

The buzz surrounding the emergence of newly signed Island recording group Under the Influence of Giants will come to a head in mid-May when the southern California band's debut single, "Mama's Room," goes up on iTunes along with three other tracks from their self-titled debut album, due to arrive in stores on August 8th. UNDER THE INFLUENCE OF GIANTS is produced by former Blind Melon members Chris Thorne and Brad Smith.

UTIOG "have found their rhythm," declared the Los Angeles Times on its Buzz Bands page last month, citing "the fivesome's energetic live show," as they move to progressively larger venues around the L.A. area. The group headed out with New Orleans electro-alt rock collaboration Mute Math on a 7-city club tour opening at the El Rey in their hometown of Los Angeles on May 9th, then moving on to Slim's in San Francisco (11); Crocodile CafÃ© in Seattle (13); Bluebird Theatre in Denver (16); Fine Line Music CafÃ© in Minneapolis (18); Park West in Chicago (19); and The Intersection in Grand Rapids, MI (20).

UTIOG – Aaron Bruno (vocals/lyrics), Jamin Wilcox (drummer, keyboards), Drew Stewart (guitars), and David Amezcua (bass) – have been praised for their combination of rock energy tempered with pop sensibility, harmonies and a hefty dose of groove based funk. Well-grounded in the SoCal rock scene, Aaron and Drew were Westlake High School pals before they got together as the core of Home Town Hero (Maverick, 2002). Jamin, son of famed drummer Willie Wilcox (Hall & Oates, Todd
Rundgren's Utopia), also had a major label experience under his belt as a member of Audiovent (Atlantic, 2002).

"The music the Giants continue to compose reflects their wide array of musical influences," declares the band's MySpace page. As their Island debut bears out, the Giants' funk-inflected, hook-saturated pop-soul is a combination of the Talking Heads' African poly-rhythmic groove ("Ah-ha," "Got Nuthin'"), the ethereal falsettos of Michael Jackson and Prince ("Mama's Room"), the blue-eyed R&B of Hall & Oates and George Michael ("In the Clouds"), the insinuating melodic pop of Rubber Soul ("Stay Illogical"), Earth, Wind & Fire's horn-driven, noir-ish funk ("Against All Odds"), McCartney's winsome balladry ("Lay Me Down") and even the throbbing beat of post-hip-hop by way of Madonna ("Meaningless Love"). "The album is a musical journey of many influences from different bands," says Jamin. "We're like a mousetrap ready to snap shut on the unsuspecting listener."

Under The Influence Of Giants, In...

Under The Influence Of Giants, Mamas...

Under The Influence Of Giants, In The Clouds, Video Video

Under The Influence Of Giants, Mama's Room, Audio Stream Video