Una Healy, Rochelle Wiseman, Mollie King, Frankie Sandford and Vanessa White from British pop girl group The Saturdays arrive at LAX airport and are escorted to a large awaiting vehicle while various officials tend to their luggage. Una is pushing a stroller in which lies her 6 month old daughter Aoife Belle Foden who is fathered by England rugby union player Ben Foden. While the girls all gather into the vehicle, attendants load on their many suitcases into the luggage hold.

Una looks rather underdressed compared to her bandmates who don high heels and super glam outfits; Una wears a simple vest, scarf and skinny jeans with flat shoes and sunglasses - though, of course, considering she's constantly running around after Aoife even while she's working, she still manages to turn heads with the more casual look.

The Saturdays Browse For Costume Ideas...

The Saturdays Attend A Meeting In...

The Saturdays Run Errands In LA

The Saturdays Arrive At LAX With...

Una Healy shares the secrets to her glowing skin 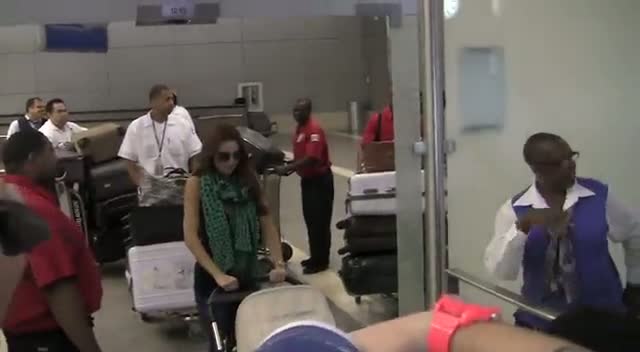