Uma Thurman and ARPAD BUSSON have reportedly ended their engagement for the second time and split up. 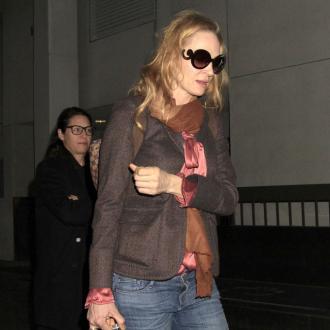 Uma Thurman and ARPAD BUSSON have split up again.

The 'Nymphomaniac' star got engaged to French billionaire 'Arki,' with whom she has 21-month-old daughter Luna, for the second time in 2011 after calling off their first engagement in 2009, but they recently ended their romance for good.

A source told UsMagazine.com: ''It's true.''

The 43-year-old actress first sparked rumours she was single again after attending the Room to Grow Spring Gala in New York City alone and without her engagement ring.

An insider told the UK's Mail on Sunday newspaper: ''Uma and Arki were due to attend a gala together on April 8, but Uma showed up without her engagement ring or her fiance. Arki was scheduled to attend and it seemed clear there was only one reason why he didn't show - because he and Uma are no longer an item.''

The blonde beauty, who also has a daughter, Mia, 15, and son, Levon, 12, with her ex-husband, Ethan Hawke, recently admitted that she is happier than she has been in years.

She said: ''I'm happier now than I've been in many, many years. I'm trying to live as peaceful a personal life as possible. I guess I'm less jaded now than I've ever been, definitely less than when I was younger.''