U2 Plan 'Glastonbury On Steroids'

U2 want to put on a ''Glastonbury on steroids'' performance by sneaking in some huge pyrotechnics to this year's festival. 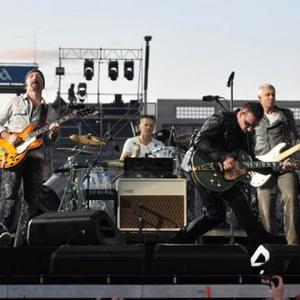 U2 want to put on a "Glastonbury on steroids" performance at this year's festival.

The 'Elevation' group are headlining the festival this year for the first time ever - after having to pull out of its 40th anniversary in 2010 - and bassist Adam Clayton says they will be "sneaking in" some of the huge pyrotechnics from their 360 Degree world tour for the stage show.

He said: "It's very un-Glastonbury to have a big production, but we will be sneaking a few things in through the back gate which will hopefully make the experience a little more like Glastonbury on steroids.

"We're stretching the levels of what can be done. We hope to create a mind blowing experience that reacts well with all the other substances involved."

The rocker also hinted the group's set for the British festival will include hits from their celebrated 1991 album 'Achtung Baby' album, in honour of its 20th anniversary.

He added: "We want to go back to our 90s work that plays into a certain kind of psychedelia and do something tailored around that, from the Zoo TV to PopMart. This is the 20th anniversary of 'Achtung Baby' so there's a nice connection there and we thought we should mark that."

U2 headline Glastonbury's Pyramid stage on Friday June 24. The festival,which runs Until June 26, will also see headline sets from Coldplay and Beyonce Knowles.