U2 frontman Bono claims he is better than ever after undergoing surgery on his spine last year. 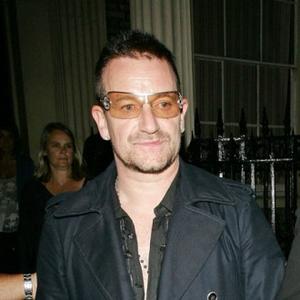 U2 will be fronted by "Robo-Bono" at the Glastonbury Festival.

The legendary rockers will headline the world-famous music event in Somerset, South West England on Friday (24.06.11), a year after they pulled out of playing after the frontman underwent surgery on his spine in Germany, and the 'One' singer says he is feeling better than ever.

Describing himself as "Robo-Bono", the frontman said: "Were I to pull down my pants I have 'Made in Germany' stamped on my ass.

The singer also hinted he would have been forced to give up performing if the surgery hadn't gone well.

In rehearsal footage posted on The Sun newspaper's website, he added: "Last year I came out of surgery in Munich and it went very well.

"If it hadn't then things could have been very different for me."

Meanwhile, drummer Larry Mullen Jr. admits there have been rows in the band over what songs to perform at the festival.

He told BBC Radio 1: "It's been exciting but there's been pressure. I'll be happy when it's over, in a positive way.

"We've gone through a number of combinations of songs. Everybody seems to have a slightly different opinion.

"There's the 'Where The Streets Have No Name' camp and then there's the more subtle approach, the 'Achtung Baby' dynamic approach where you build slowly."