U2 Feared Tour Was Over When The Edge Fell Off Stage

Irish Rockers U2 Feared Their Huge World Tour Was Over On The First Night When Guitarist The Edge Plunged Off Stage In A Freak Accident. 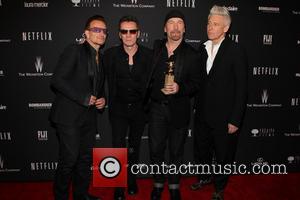 The band kicked off the iNNOCENCE + eXPERIENCE Tour at the Rogers Arena in Vancouver, Canada on 14 May (15) but the first night was marred by drama when the musician toppled off the side of the catwalk during the encore.

The Edge was battered and bruised, but did not sustain any serious injuries, although his bandmates feared the worst when they saw him tumble into the pit in front of the audience.

In a group interview with CBS news, bassist Adam Clayton says, "(I felt) sick in the pit of my stomach... Cos I knew what was down there," and drummer Larry Mullen, Jr. adds, "(I thought it would) start and end all in the same evening."

Frontman Bono interjects, "I was thinking about days off myself," while The Edge admits he feels relieved to be able to continue with the tour, adding, "It was a moment of reverie where I just completely lost track of where I was on the stage... It was a weird moment... It would have been the shortest tour in history."