U2 ''didn't earn much'' from their new album 'Songs of Innocence, which they gave away for free. 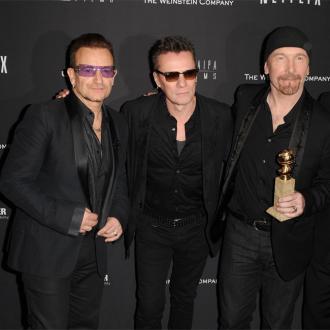 The Irish rockers gave away 'Songs of Innocence' to iTunes users because they felt their fans ''deserved'' to have the record for free, and admit even Apple were shocked by the scale of their generosity.

Frontman Bono told Italian TV show 'Che Tempo Che Fa?': ''It is a very difficult time for songwriters because people download music in an illegal way. Apple wanted people pay to for music and we really appreciate it. We spoke to Apple and we decided to do a gift to those who purchase music on iTunes.

''We shared the whole album and Apple were quite shocked about it. I said to them 'You pay the album and then you can give it to the people for free'.

''We obviously didn't earn much but we're happy that a lot of fans can have a chance to listen to our latest album for free. They deserve it. ''

Guitarist The Edge recently admitted he had ''doubts'' about the move to give away the album.

He said: ''I absolutely had my doubts about it before we did it, and after, but it was the right thing to do. It was an opportunity that will only ever come around once for anybody. I don't think anybody would want to do it again.''