U2 Surprise New Yorkers By Busking In Grand Central Station

U2 Bono The Edge Jimmy Fallon

The band filmed the surprise acoustic set ahead of their Jimmy Fallon appearance later this week.

U2 caused a bit of a stir in New York this week by performing a secret gig in a subway station.

The Irish rock legends, much more accustomed to playing cavernous stadiums and arenas, dressed up as street musicians and made an impromptu busking performance at Grand Central station on Monday night. The set was filmed ahead of the group’s appearance on Jimmy Fallon’s ‘Tonight Show’ this Friday (May 8th). 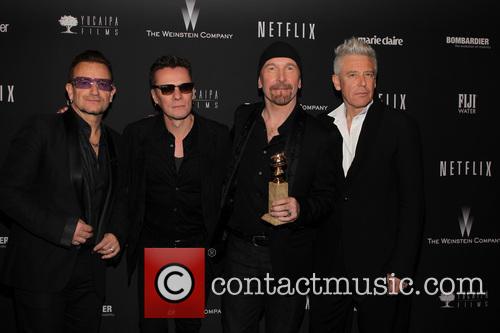 In the aftermath, videos and photographs taken by fans began appearing online, including an Instagram video taken by user u2italianfans that showed Bono wearing a blue cowboy hat and leading the small assembled crowd in an acoustic rendition of the group’s 1988 hit ‘Angel of Harlem’.

Other photographs appear to show the singer sporting a fake goatee beard, while The Edge appears to be wearing a long-haired wig and bandanna. Not entirely convincing outfits, judging by the images, but they wouldn’t have wanted the disguises to be too good, right?

Over the weekend, Bono was involved in another impromptu skit with the presenter, this time poking a little bit of fun at his bicycle crash in Central Park last year.

U2 of course had to cancel their week-long residency on Fallon’s show last November after that crash left Bono with some serious injuries, which reportedly left him requiring five hours of surgery. Back in January, he revealed that his hand had been so badly injured that he may never be able to play guitar again.

In a recent interview with the New York Times, he updated fans on his recovery. He is still having difficulty bending the fourth and fifth fingers of his left hand, meaning that he is still unable to play the instrument, and will not know whether he will make a full recovery for another thirteen months.