The Edge Annoyed By U2 Carbon Criticism 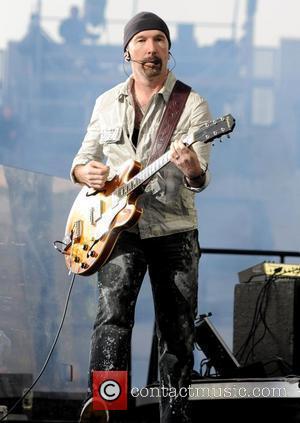 U2 star The Edge has hit back former Talking Heads frontman David Byrne for criticising the band's lavish shows - insisting the Irish rockers have always offset their carbon footprint.
The With Or Without You hitmakers are mid-way through their ongoing 360 world tour, but have received criticism from eco experts for wreaking havoc on the environment as they transport their massive sets across the globe.
Byrne also expressed his annoyance at the group's jet-setting ways, saying, "Those stadium shows may possibly be the most extravagant and expensive (production-wise) ever: $40 million to build the stage and, having done the math, we estimate 200 trucks crisscrossing Europe for the duration."
But The Edge is keen to downplay the criticism the band is facing over their concerts - insisting it is a problem all musicians face on tour.
He says, "I think anybody that's touring is going to have a carbon footprint. I think it's probably unfair to single out rock 'n' roll. There's many other things that are in the same category but as it happens we have a program to offset whatever carbon footprint we have."