Review of U2 live at Don Valley Stadium, Sheffield on Thursday, August 20 2009. 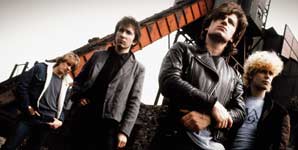 Having released album number 12 earlier this year, rock veterans of over 20 years U2 have been performing in European stadiums leading up to tonight's penultimate show on this side of the Atlantic. A short break precedes the North American leg of the tour, which begins in Chicago on September 12.

Famed for previous stage layouts, the band's claw/UFO setting is both humbling and awe-inspiring, an impact which isn't lost on Bono and co when they pay tribute to stage designer Willie Williamson during the set and ask the crowd to serenade him with a rendition of 'Happy Birthday'. Whilst not set exactly in the middle of the stadium, it does allow for an 'in the round' experience and means when the band hit the stage it is an enveloping roar which brings to life a clear summer's night. A quartet of songs from latest LP 'No Line On The Horizon' begins the show, including the title track and lead single 'Get On Your Boots', which gives additional kick from its riff live than it does on record. The solid start is capitalised on by a couple of heavier hits - 'Beautiful Day' and 'Elevation' - the latter of which has the capacity crowd bouncing mindlessly, before the appearance of the first classic from the catalogue, 'I Still Haven't Found What I'm Looking For'. Performed to perfection, Bono's vocals are not the last time during the night spine-tingling, while every note and beat from his band mates is hit and crystal clear. Speaking of The Edge, Adam Clayton and Larry Mullin Jr., they may not have the obvious enthusiasm of their bouncing frontman, but they do take turns to strut around the stage's outer perimeter, doing a fine job at keeping the surrounding audience involved and not just focusing on where the masses are.

As the career-spanning tunes role out - 'Unforgettable Fire' and 'Sunday Bloody Sunday' through to more recent releases such as 'Vertigo' - the structure on which the band play unleashes it's next surprise, with the huge video screen suspended from the roof lowering and cocooning the band in a multitude of images and lights. It means the visual aspect is equally as stunning as the sonic stimulation, of which 'Pride (In The Name Of Love)' is another stand out moment. A video to highlight the situation of Aung San Suu Kyi in Burma leads into a truly affecting performance of 'Walk On', while 'One' and 'Mysterious Ways' allow two of U2's best loved hits to wrap up the main part of the show and allow for mass sing-a-longs. The encore high spot is undoubtedly 'With Or Without You', a song which would be a focal point of any live performance and is delivered with a genuine emotion in Bono's singing. Having delivered so many great moments, perhaps the only slight miscalculation to the set is to end with 'Moment Of Surrender', which is an acceptable number but with the second half of the show featuring so many strong tracks it doesn't quite stand up to the same quality. It is very much a forgivable blip and comes at the end of two stunning hours which further enhance U2's reputation as one of the world's finest stadium acts.