The rapper is quite the character when it comes to chat shows.

One of alternative hip hop's most eccentric entertainers Tyler The Creator proved to be quite the guest to remember when he appeared on 'The Late Show with Stephen Colbert' this week, cheekily grabbing the host's butt and neglecting to wear pants for his interview. 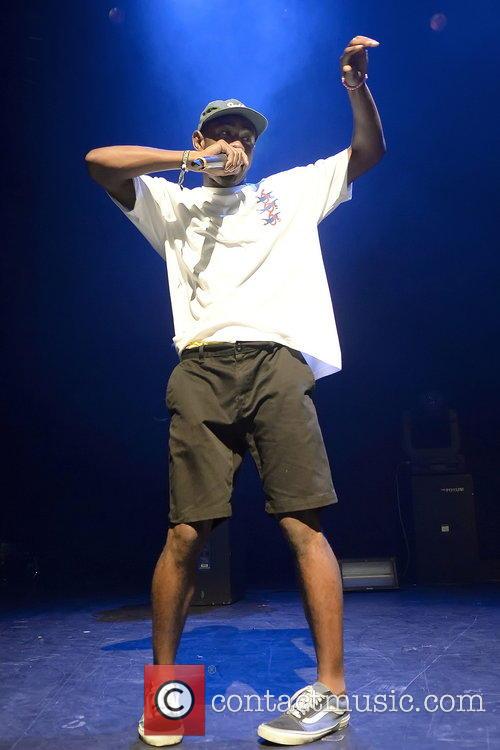 The rapper briefly lid his hand to Stephen Colbert's rear as he greeted him with a hug, then proceeded to deny he did such a thing. In fact, Stephen was forced to replay the footage in slow motion, to which Tyler broke his deadpan expression with a mischievous grin.

Afterwards, he changed the subject by repeatedly talking about the temperature in the room. 'It's ridiculously cold right now, dawg', he said. 'I'm wearing boxers right now, it's freezing.'

A bewildered Stephen then listed just a few of Tyler's recent achievements, from his forthcoming studio album 'Flower Boy' and his hip hop collective Odd Future to designing shows for Converse. But the 26-year-old insists that his main priority in life is oxygen. 'Not funny, I have horrible asthma', he revealed. '[My inhaler is] in my other pants because I didn't want my boxers to look bulky.'

He also hilariously revealed that despite a lot of his jewellery designs for Golf Wang being based on Elizabeth Taylor, he has absolutely no idea who she is and has never even heard of her 1940s movie 'National Velvet'. 'She was in a movie?' He said, as he failed to get the numerous references Stephen dropped. 'See, I don't know all that stuff. I found a book one day, lurking in Barnes & Noble, and was like, 'Oh my God, this little white lady got some nice stuff!' and called it a day.'

We actually thought he was getting serious when he started talking about his new album, but it's clear he had no idea what he was doing when Stephen had to show him the song that he was set to perform that evening because he'd forgotten. Never change, Tyler the Creator!