Rapper Tyler, The Creator Has Been Forced To Scrap Shows In The U.k. And Ireland Because He Has Reportedly Been Banned From Entering The Countries. 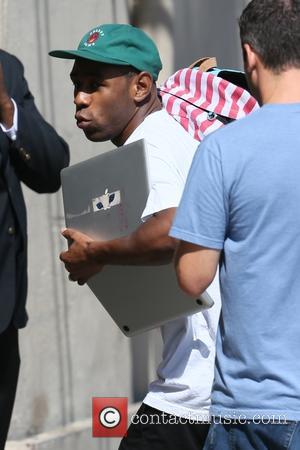 Explaining his reasons for cancelling his a string of upcoming shows, the Odd Future star has told fans he has been blacklisted by customs officials for "3-5 years".

Tyler was scheduled to perform in Belfast, Northern Ireland and Dublin, Ireland prior to appearances at the Reading and Leeds festivals. All four concerts have been axed.

On Wednesday (26Aug15), he took to Twitter.com and explained he been banned from entering the U.K. because of "lyrics from 2009".

The rapper's manager, Christian Clancy, adds, "Tyler has been banned from entering the U.K. for somewhere between 3 to 5 years per a letter from the secretary of state for the home department of the united kingdom. The letter specifically cites lyrics he wrote 6-7 years ago for his albums bastard and goblin - the type of lyrics he hasn’t written since...

"Highlights from the letter include that his work 'encourages violence and intolerance of homosexuality' and 'fosters hatred with views thats seek to provoke others to terrorist acts...'"

Clancy also reveals Tyler has visited the U.K. "over 20x (times) in the last 5 years without incident", adding, "This is a broader issue of free speech, with new lines being drawn that include reaching back in time without acknowledging growth. In fact, punishing growth."

The last-minute cancellations come weeks after Tyler axed his Australian tour following protests from women's rights groups, who took aim at him over his "anti-women" lyrics.