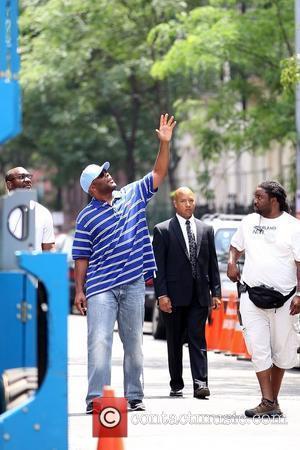 Picture: Tyler Perry on the set of 'For Colored Girls Who Have Considered Suicide When the Rainbow Is Enuf' filming on location. New York City, USA...

Tyler Perry is breathing a sigh of relief after a U.S. appeals court cleared the filmmaker of accusations he stole the idea for his movie DIARY OF A MAD BLACK WOMAN.
Donna West's case against the actor/screenwriter was dismissed two years ago (08) after jurors in a Texas court found she did not have enough evidence to support her claim that Perry lifted material from her play, Fantasy of a Black Woman, to use in his 2005 blockbuster.
The playwright launched an appeal against the verdict but on Monday (23Aug10), the 5th U.S. Circuit Court of Appeals ruled there was no improper conduct in the trial, according to the Associated Press.
West's play was performed three times in 1991 in Dallas, and she contended Perry could have gained access to the script in 1998 when he presented his plays at the Dallas Black Academy of Arts and Letters.
Perry's film took in more than $50 million (£33 million) at the box office.