Kal-El finally gets to catch up with cousin Kara.

It had to happen eventually! We'll finally get to see a new incarnation of Superman for the 'Supergirl' TV series as season 2 arrives on our screens this fall. He'll be portrayed by Tyler Hoechlin, who's best known for playing Derek Hale in 'Teen Wolf'. 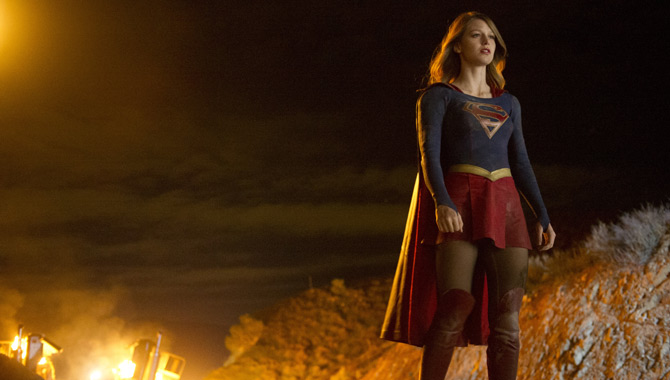 The first family image of Supergirl and Superman together has been unveiled, and it's also our first glimpse of the new Clark Kent's outfit. It's very similar to Henry Cavill's 'Man Of Steel' suit, though perhaps a little cleaner. It was designed by costume designer Kiersten Ronning, who also did Supergirl's outfit and also happened to work on the set of 'Batman v Superman: Dawn of Justice'.

Supergirl isn't the only new hero coming to The CW this fall. @TylerL_Hoechlin is joining her as Superman! pic.twitter.com/NgLKg3wjiz

Tyler Hoechlin joins Melissa Benoist, Mehcad Brooks, Chyler Leigh and Calista Flockhart on the show for the first episode of the second series due out in October. While probably best known for his 'Teen Wolf' role, he also appeared in the movies 'Hall Pass' and 'Road to Perdition', as well as the family drama '7th Heaven'. Earlier this year he starred in Richard Linklater's college comedy 'Everybody Wants Some!!' Plus, he's got a number of other projects under way including 'Fifty Shades Of Grey' sequels 'Fifty Shades Darker' and 'Fifty Shades Freed', and spy drama 'Stratton' co-starring Dominic Cooper, Connie Nielsen and Tom Felton.

More: Meet the cast of 'Supergirl'

It had already been announced that Superman was going to make an appearance at the beginning of this second series. He arrives in National City to visit his cousin Kara (Supergirl), which is just as well given how his existence has had a big impact on Kara bringing Supergirl to the public. She was the one who had to deal with Reactron's vendetta against her cousin in 'Fight or Flight' after all.