The 26 year old rapper was scheduled to appear in court for questioning under oath about his financial affairs, connected with his ongoing eviction case.

Rapper Tyga is facing the possibility of jail after a judge issued a bench warrant for his arrest, when he failed to show up to a court hearing about his ongoing eviction case in Santa Monica.

The 26 year old star, who is currently dating model and reality TV star Kylie Jenner, was supposed to turn up to a hearing on Tuesday morning (August 9th) at the hearing with his landlord, Gholamreza Razai, who claims that Tyga owes him $480,000 in rent arrears, according to TMZ. 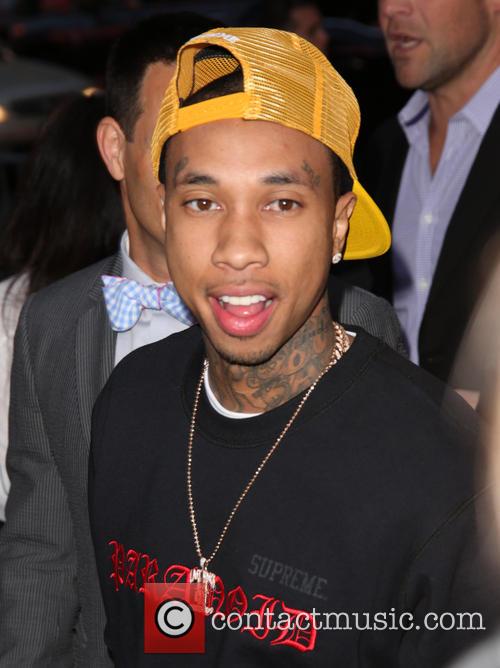 Tyga, pictured in April 2016, was scheduled to appear in court in Santa Monica on Tuesday

He recently purchased Jenner a $200,000 Mercedes-Maybach for her 19th birthday, which upset the landlord as he is supposed to be working off what he owes to him. Tyga has been in legal trouble in the past, having previously been evicted from his home and getting his car repossessed.

At Tuesday’s scheduled hearing, the rapper was due to have been placed under oath and questioned about his financial situation, as the $480,000 judgment against him in favour of the landlord is still outstanding, reports the Los Angeles Times.

The case dates back to 2011, when Tyga rented a mansion in Malibu with a view of the Pacific Ocean at a price of $16,000 per month. Legal papers allege that he missed a monthly rental payment before breaking his lease early.

The original lawsuit, brought in 2012, alleged that the rapper – real name Michael Ray Stevenson – left the property in a damaged state when he unilaterally broke the rental agreement early, since when rental arrears have been stacking up.

More: Kylie Jenner is NOT pregnant, and is heartily sick of the repeated rumour