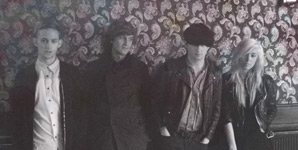 Alright, so apart from being the subject of an age old song by loveable cockneys Chas & Dave and the setting for Dreamland amusement park before the likes of Alton Towers and Drayton Manor became household names, what else has the seaside town of Margate had to shout about in recent years? Very little until now, the word "shout" being rather operative in this instance.

Surf punk quartet Two Wounded Birds may be relatively unknown north of the Kent side of the Thames Estuary but their lo-fi pop has already attracted the attention of one Stateside admirer, The Drums Jacob Graham. So much so in fact that he put out their inaugural before convincing the rest of his bandmates to invite Two Wounded Birds on The Drums last UK tour in December 2010.

Who formed the band?
Johnny: I did about a year and a half ago, then I met Alison soon after.
Tommy: I joined about a year ago.
Johnny: The biggest problem we had was finding a drummer. We got through about six or seven before James hooked up with us!

What is it about drummers?
Johnny: I don't know. It's like we just seem to be really unlucky in that aspect, more than any other band I know. Most of our previous drummers couldn't be bothered to rehearse, so getting someone as committed as James was a bit of a Godsend really. Our last drummer quit the band literally two weeks before we were due to go on tour with The Drums, so for James to come along, learn the songs and click with the rest of the band in such a short space of time was incredible looking back.
Tommy: We were panicking, and Johnny brought his mum along and he was saying, "What are we going to do?" and as it turned out she knew a drummer.
Johnny:.and it was James!

What inspired you to start a band in the first place?
Johnny: I guess I speak for everyone when I say that we all love timeless pop, y'know classic stuff from the 1950s and 1960s like the Beach Boys and The Beatles. The Mamas & The Papas too.

I can hear a lot of retro sounds in your music, although perhaps not quite as far back as some of those. I was thinking more along the lines of The Cramps or C86 bands like The Shop Assistants or The Soup Dragons.
Tommy: It's funny you should say that, as I'm a massive fan of all that kind of thing.

Who's your favourite band from that era?
Tommy: I'd probably go with The Flatmates. They were such an incredible band. I've been trying to get hold of a compilation of their complete recordings - I know they never got around to making an album - for so long now. Their record label Cherry Red put out a CD of material that would have been The Flatmates debut album two or three years ago and I've searched high and low but can't find it anywhere.

Coming from Margate, I guess it must have been difficult to get yourselves established from the outset?
Tommy: As much as I love Chas & Dave, that is the only musical association with Margate to my knowledge!

Having spent numerous summer holidays there as a child, I have to ask if Dreamland amusement park is still there?
Johnny: No, Dreamland's shut down! The Scenic Railway, which was the oldest roller coaster in Great Britain, got burnt down for insurance money, which nobody officially knows about but everyone actually does! I think they're starting it up again as it happens.

Going back to your music, what kind of response do you get in your hometown?
Johnny: I think people like it because it's really fresh.
Alison: Some people don't like it because they're into metal. That's probably the biggest scene of sorts back home.
Tommy: There are a lot of bitter people as well.
James: A lot of people in Margate don't listen to anything new. They're just quite content to go about their familiar daily lives.

Jacob Graham from The Drums put out your first EP. How did that come about?
Tommy: They found us on MySpace, then just kept on messaging us saying they really liked what we were doing, and after that we spoke every day and met up a few times. The next thing we knew they were asking us to go on tour with them, which of course we did.

Did it create any resentment from other bands that you were going on tour with arguably the biggest new band of 2010 playing to sold out crowds every evening?
Johnny: I think there was a handful of people who thought something sinister was going on when in actual fact we just got lucky.
Tommy: If people don't like it they can go fuck themselves!

Do you see The Drums as being kindred spirits musically? There is a similarity both in the influences you share and how each band portrays themselves for example.
Johnny: Yeah definitely. They write really good songs.
James: I think our music has more of a rock and roll edge to it than pop though, certainly more so than theirs.
Johnny: Their album is brilliant. It was like a breath of fresh air when it came out among so much predictable indie.

Your current single has just come out on Moshi Moshi. How did that come about?
Johnny: Stephen (Bass) from the label had been watching us for about a year and saw us on The Drums tour and asked if we'd be up for putting a single out on his label. We're hoping to put another single out on Moshi Moshi later in the year and then we'll see what happens after then. We haven't got as far as thinking about an album yet.

Do you have enough songs to put out an album you'd be totally satisfied with at this moment in time?
Johnny: We do. There's about fifteen songs that are ready for the record. It's just a case of picking the right ones and recording the album first before taking it to labels in the hope of someone putting it out. Ideally I'd like the album to be out by the end of this summer, but obviously we've a lot of shows to do between now and then so I guess we'll just have to wait and see.

'Midnight Wave' seems quite a progression from 'Keep Dreaming Baby' in some ways.
Johnny: Definitely. I think we've improved our melodies. There's more four-chord progression on the songs we're writing now.
Alison: There's a lot more variation to this band than some people tend to give us credit for.

What festivals are you playing this summer?
Tommy: We're doing most of them. Glastonbury, Reading, Leeds. Bestival I'm really looking forward to, as it's a great line-up and The Cure are playing.

Finally, where do you see Two Wounded Birds in twelve months time?
Johnny: Number one in the R&B charts with a Top Ten Billboard album for good measure! But seriously, I just want this band to make one of the greatest debut albums of all time.
Tommy: We just want to keep making great records and then hopefully we'll be around for a very long time. 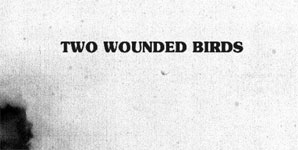