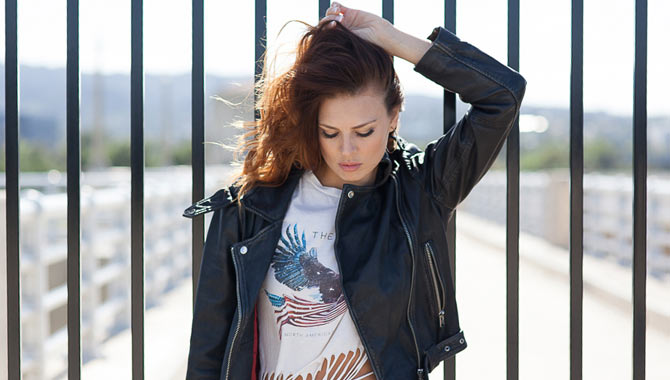 An interview with Twinnie

After the success of her debut single 'Cool', Twinnie is back with another country-pop anthem 'Home'. Since leaving Hollyoaks, Twinnie has gone from strength to strength and has big plans for her music. 'Home' is a heart wrenching defiant track about losing love with a sound akin to the likes of Mumford and Sons and early Taylor Swift. We caught up with Twinnie to see what her plans are for the rest of 2016.

You're well-known for your role as Porsche McQueen in Hollyoaks and acting in general, what made you decide to concentrate on your music instead?
I suppose to be frank, it's hard to live in London and dedicate your time to music when you're not getting paid very much - especially at the beginning. I used to model and by chance, at a modelling casting, they were auditioning for the part of a northern girl in Hollyoaks. I hadn't been put up for it by my agent, but my friend was there so I just gate crashed! 8 rounds later I got it. I was lucky really, acting is part of being artist I think; it goes hand in hand when you have to do music videos etc. I learnt a whole different side to my craft, new people!! Very grateful I was given the opportunity!

You've performed backing vocals for a number of huge stars including Pharrell Williams and Brian May - how did that come about?
Brian gave me my first job and it was in 'We Will Rock You' at the West End. I remember on my 20th birthday we sang 'The Show Must Go On' - it was incredible! The audience was about 2500 and we used to get standing ovations every night. That's one show I really miss and the people in it!
Pharrell came about originally through my agent they needed 3 girls to mimic the girls in his and Robin Thicke's hit 'Blurred Lines' video. We sang and did a bit of backing dancing for their UK promo along with TV performances and BBC Radio 1's Live Lounge. I'm waiting for the day I get on as a guest with Graham Norton to see if he remembers me hahaha!! Wishful thinking!

Have you always known you'd eventually want to pursue music over acting?
I've always been doing music - the start of my career was doing 'We Will Rock You'. I'd still be doing gigs and writing when I had the time while I was in Hollyoaks. It's something that is in me (that sounds so cheesy) but when I think of what I wanted to be when I was younger, I was an artist dancing in bedroom. I loved putting on a show so when I couldn't do music, I've expressed my creative side in other ways hence the acting, west end, and modelling.

Your last single 'Cool' reached number 2 in the iTunes country charts - were you expecting your debut single to be such a huge success?
No not at all, I really was so grateful and was shocked beyond belief. I was on a family holiday at the time and they were all checking for me saying it's at number 5 number 4 number 3 etc. I'll get number 1 next time haha!

You travel to LA and Nashville regularly to work with critically acclaimed songwriters who have worked with the likes of Pink and James Bay - do you feel under pressure to be as successful as those big names?
No not really. Firstly I'm yet to come across one bad egg who I've written with. I think the people who I love and respect in music, especially writers, didn't get a hit until they were 35 plus! We all have our own journey and at the end of the day but we just wanna hang out, write a smash hit, have a laugh doing it and go home. It's a weird thing songwriting and it's a unique skill. I learn constantly, I always want be the worst in the room (that sounds weird) but I always think it's better that way because I can up my game. It challenges me to be better and pushes me to my limit.

If you could collaborate with any artist, dead or alive, who would it be?
Can I be greedy and bring back more than one?! I love so many.. Freddie Mercury and Michael Jackson simply because they're amazing and I think we'd get on. Both of them were Virgo star signs. Haha!! They were both showmen who knew how to put on a performance - their voices and music was incredible. I've done both of their west end shows ('We Will Rock You' and 'Thriller') so I have to be loyal!
Alive - Taylor swift. I just love the woman!

Your latest single 'Home' has a slightly more 'pop' feel than your last single - was this a conscious decision?
No I wrote them both around the same time. At the time I was obsessed with Mumford and Sons and I feel 'Home' has a hint of them more aka with a band feel, group vocal and lots going on. Lyrically, I think it's one of my best! 'Cool' is very catchy though both are special songs to me.
I think it's good to be versatile. If it's a good song it doesn't matter what the production is. It's funny I'm getting a pop response from 'Home' because I thought 'Cool' was way more pop... Just goes to show, maybe 'Home' is more radio friendly?!

Do you feel that you're influenced by country singers who have moved towards the pop side - like Taylor Swift - or by acts who are a bit more in-between - like Mumford & Sons?
I'm definitely influenced by both. I love telling a story, which I think is very country but I love the pop element like Taylor as well. You can be more fun and I also love creating a bigger sound and an anthem with layered harmonies etc. Basically, I'm the northern inbetweener!

Do you think there's still a place for country music in the UK as much as there is in places like Nashville?
Yes of course but I have to say country here is not like country there, it's completely different. Here we have to be a bit more commercial with it to make it more appealing to radio and the listeners. In Nashville it's different. Tt's part of their culture if that makes sense.

Any plans to tour the UK in the near future?
Not yet working on finishing the album, doing radio performances and gigs next year.

What are your plans for the rest of 2016?
More writing, travelling to LA and Nashville, gigs and trying to get some sleep!! Haha!