Hailing from the south of Illinois, heavy rock band Tweak Bird release a headbangingly awesome new music video for their track 'The Weight' taken from their forthcoming 7-track EP 'Undercover Crops' which is due to be released on November 5th 2012 through Volcom Entertainment.

The video is spectacular montage of various bits of grainy footage from people smoking cannabis to weird dancing cartoon people to live show clips from their American Legion hall show in Highland Park, California on August 31st 2012 which truly captures the infectious essence of their performances. The track itself is nothing short of heavy with the most emphasis on the thumping bass lines and extra loud drum beats. The vocals, on the other hand, (or what there is of them) push the band out of the heavy metal genre due to the fairly indie style which gives them a touch of mainstream.

Tweak Bird is made up of brothers Ashton Bird and Caleb Bird who have moved from their hometown and made a home on the other side of the States in Los Angeles. The hav been making music for a good ten years at least and are currently touring with fellow metalheads the Melvins until October 22nd 2012. 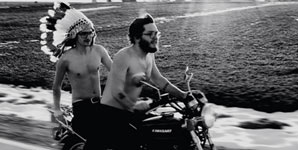