The video for their most recent single 'The Turn, The Pike and The Glow' is also available to view online. It features the band's fun sense of humour, lots of flashing of the lights and a launderette all coming together to create this fantastically random video that will certainly get you toe-tapping and head-nodding. The unique vocals provided by the Italian Sandro Schiena and Giuseppe Le Mela are energetic sounding and always worth just-one-more listen - particularly coupled with the catchy lyrics and upbeat drum beats.

According to Sandro, the song was inspired by the award-winning documentary 'Inside Job' which talks about the current financial corruption in the world. 'The track is an ironic take on off-shore banking and moral bankruptcy', he says.

Sandro also explains that the album, 'Inflatable Optimism', is a take on the band's state of emotion throughout their coming together. 'There were times for us when optimism had to be 'inflated' artificially', he says. 'These aren't exactly rosy times we're living in'.

The band started out with Sandro and Giuseppe in Rome. They flew over to the UK to do various live shows in 2007 and even supporting The Futureheads and Cooper Temple Clause. They moved to London and discovered Sombrero-wearing busker Anthony J. Hutchinson (drums) and added him to the band with, more recently, guitarist Tom P. Griffiths.

They have previously received airplay from Frank Skinner on Absolute Radio for their previous single '1986' as well as brilliant support from Amazing Radio. 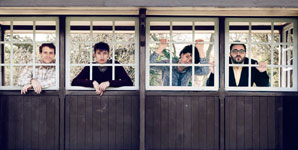 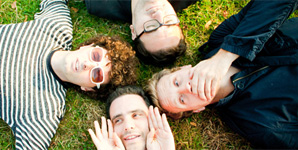