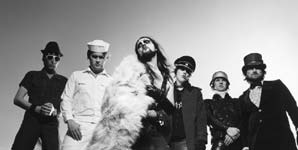 Yeah, it's been a long time coming since Turbonegro started shaking up the punk scene in Oslo in the late 80's. A brief history of time: Legendary punk album "Ass Cobra" (96) gave them instant fame on the worldwide underground punk scene, "Apocalypse Dudes" (98) was the last great rock album of the 90s, and then there was the infamous tale of vocalist Hank Von Helvete collapsing in the emergency ward of a mental institution in Milano in 1998, leading to the break up of what used to be the unstoppable punk rock juggernaut Turbonegro.

Four years later, in 2002, a reunited Turbonegro played their biggest shows ever at Scandinavian and German festivals, performing for over 100,000 enthusiastic Turbojugends. The band then signed to Swedish label Burning Heart, and released the highly anticipated album "Scandinavian Leather", complete with artwork from legendary "Revolver"-designer Klaus Voorman. A US tour with Queens Of The Stone Age proved that the American Turbojugend contingent had grown completely out of control, and almost 150 shows later, Turbonegro finished the "Scandinavian Leather" campaign by selling out the House Of Blues in Los Angeles two days in a row in December 2004.

Now, people, its 2005, and Turbonegro must be called the worlds biggest underground rock band. Get ready for the best rock album you'll ever fall in love with: the dark, beautiful, catchy and dangerous punk rock epic that is "Party Animals".

"We got 11 hits, all of them beautifully negative switchblade serenades" - Euroboy, 2005.

While "Scandinavian Leather" was recorded at their own Crystal Canyon Studio in Oslo, Turbonegro decided to bring in Steve McDonald as co-producer for "Party Animals". McDonald played bass and sang in Hawthorne, California band Redd Kross from the age of 11, and "Standing in front of Poseur" from the bands 1979 debut ep is still a punk rock classic. Redd Kross transformed from being an archetypical L.A.-punk band to taking in influences from the glam and stadium rock of the seventies, not unlike what Turbonegro has done through their career. In recent years McDonald has worked with artists such as Beck and The White Stripes. On "Party Animals", he's done his best to keep the bubblegum intact in the stadium rock and the sharp edged punk rock.

"Party Animals" will see a release date in America on August 23rd through Abacus Recordings.

Turbonegro All My Friends Are Dead...

Turbonegro 'All My Friends Are Dead' Free Download Video