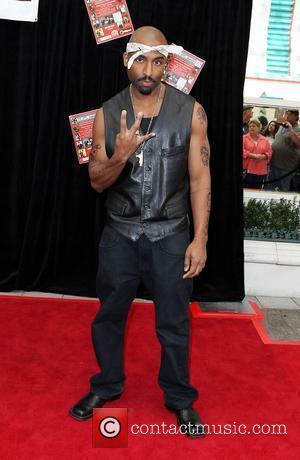 Tupac Shakur going on tour "would make sense" according to the eggheads who designed him, not the real rapper that is, but the hologram that is currently the biggest music star real or unreal on the planet. Tupac, it's now been widely documented, made a stunning resurrection at last weekend's Coachella Festival, appearing in holographic form to sing with Dr Dre and Snoop Dogg during their headlining set on the Sunday evening and even giving the Coachella crowd a shout out. Creepy.
The event has become a sensation on the internet, with many fans now mocking up posters of their own line-ups for Coachella 2013 that include dead stars like Mozart, Joe Strummer of The Clash and Little Richard and others making amusing mash-up photos of hologram Tupac and Kanye West in which Yeezy makes his infamous MTV interruption speech and tells 'Pac that Princess Leia in 'Star Wars IV' was the best hologram of all time.
However, while the laughs have been coming thick and fast, those behind the creation are well aware of the potential something like this has. Musion, who made the visual, think the hologram should go on tour to Europe with Dre and Snoop, and a spokesperson told the NME "This is obviously a historic and exciting initiative that we're all witnessing currently, and it would make sense for them to bring it to Europe and maybe take it to the rest of the world." We certainly wouldn't bet against Tupac being the only dead celeb to be gliding the earth again before the year's out.