Upon perusing True Widow's quite-excellent-as-it-happens blog, you'll notice that the very first paragraph gives resounding thanks to their label Kemado for allowing them to make their second record. While some observers may see this as borderline desperation, what it reads to these here eyes are the words of a band eternally grateful for being given the opportunity to do what they so obviously enjoy doing best - making music. Furthermore, after several listens to 'As High As The Highest Heavens And From The Center To The Circumference Of The Earth' (try saying that without taking a sharp intake of breath in-between) it soon becomes apparent that maybe the letter of gratitude should really be coming from label to artist, as not only does this record far outweigh any preconceptions one may have of its creators, particularly after 2008's so-so eponymous debut, but it also quite clearly puts the New York based imprint firmly on the map as one of the most patient and adventurous of its kind. 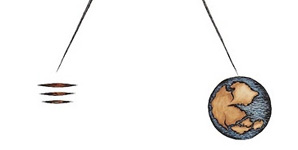 Although something of an unknown quantity outside of their native Texas, the three-piece of Dan "D.H." Phillips, Nicole Estill and Timothy Stakks have spent the last eighteen months or so crafting what by the end of 2011 could very well be a regular feature in many end of year Best-Of's. What makes this album even more compelling, and yet utterly beguiling at the same time are the way each and every one of its songs structures lilt and flutter against any pre-ordained template, instead choosing to fluctuate and develop organically in a way of their own. To describe True Widow's sound, or attempt to shoehorn them into any kind of genre would simply be doing them and their craft a dissolute disservice. Instead, it would probably be more apt to focus on how each and every one of 'As High As.''s eight songs (we won't include the ninth piece here, 'Interlude', which pretty much does as it says on the tin) mixes complexity in arrangement with simplicity in delivery, an art legendary artists such as My Bloody Valentine, Low or Smashing Pumpkins have been able to fully master previously.

There's also an ulterior reason why those three in particular have been highlighted, as quite simply they're possibly the closest comparisons evoked by True Widow at various points throughout this record. Opener 'Jackyl' might feel like a loosely embittered, spacious groove at the outset, but by the three-minute mark Estill's vocal coupled with a Phillips elevating guitar sound takes it into territories once occupied by Cowboy Junkies and now filled in a manner of speaking by the irrepressible Besnard Lakes. 'Blooden Horse', perhaps the nearest thing to an atypical slocore moment on the entire record, takes the decibel level down a notch or two, preferring to concentrate on intricacy rather than volume. The Pumpkins comparisons undoubtedly come to the forefront during 'Wither' and the intoxicating 'NH', the former's incendiary sonics complimentary to the latter's more pummelling sense of urgency.

'Skull Eyes', again featuring bass player Estill on lead vocals, reminds us of why we fell in love with the Bilinda Butcher led orchestrations on 'Isn't Anything' and 'Loveless' in the first place, its angelic wistfulness creating a more detached, sensitised air than what's gone before. Likewise the musical complexity of 'Boaz' coupled with Phillips and Estill's dual harmonies belie the sinister undertones its diminutive guitars and thudding bassline suggest. 'Night Witches' takes a more psychedelic approach like Spacemen 3 playing 'Iron Man' through a catalytic converter while album closer 'Doomser' has a presence that can only imply the band's hearts and souls ended up somewhere in the mix along with the track.

Not for the faint of heart then, but as deftly constructed statements of intent go, 'As High As The Highest Heavens And From The Center To The Circumference Of The Earth' sits unashamedly alongside the finest listening pleasures 2011 has offered thus far.