Watch the trailer for 'Gone Girl':

Richard Butler's version of French-Armenian singer Charles Aznavour's 1974 song 'She' is our first taste of the 'Gone Girl' soundtrack from the new trailer; a song that was rose to popularity once again in 1999 with Elvis Costello's rendition on the 'Notting Hill' soundtrack.

Reznor and Ross' first score together was on 2010's 'The Social Network'; a film about Harvard student Mark Zuckerberg's rise to success after setting up the world's favourite social media site Facebook. The soundtrack won them a Golden Globe and an Academy Award for Best Original Score. Fincher's 2011 adaptation of the Swedish mystery novel 'The Girl with the Dragon Tattoo' by Stieg Larsson was their next project and later won them a Grammy.

Reznor's has previously dabbled in film score projects before Ross came along, composing the 'Theme for Tetsuo' for the 2009 Japanese film 'Tetsuo: The Bullet Man'. He was also asked to do the score for Mark Romanek's 'One Hour Photo', though it was decided in the end that the music did not fit in with the movie. Reznor and Ross collaborative efforts don't stop at film; the pair are currently involved in a band side project called How To Destroy Angels also featuring Reznor's wife Mariqueen Maandig and Rob Sheridan. 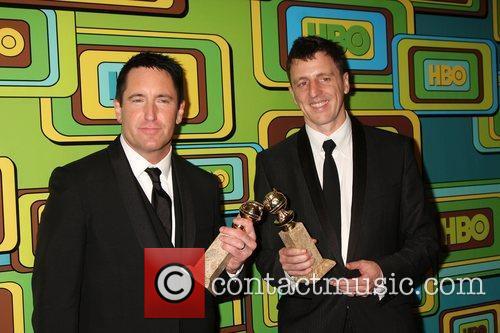 Will Reznor and Ross continue their winning streak with 'Gone Girl'?

From a pair with such musical chemistry (and individual talent), 'Gone Girl' will no doubt be prove to be another soundtrack success for Reznor and Ross. The film is set to hit theatres on October 3rd 2014.

and yes, Atticus and I are scoring David Fincher's upcoming Gone Girl!