By Charlotte Court in Lifestyle / Showbiz on 25 October 2018 Continue reading: Kylie Jenner Has Just Splashed Out On A $13.45M Mansion

Scott has hit back at a lawsuit filed last month against him by promoters PJAM, who claimed he skipped out on a pre-Super Bowl gig in Minneapolis on February 3rd.

Travis Scott has reacted to a lawsuit regarding a no-show for a pre-Super Bowl gig in Minneapolis earlier this year by countersuing the event’s promoters PJAM, with his lawyer claiming that the company is trying to “shake him down”.

The 25 year old rapper, real name Jacques Webster, was hit last month with a lawsuit for breach of contract by entertainments company PJAM for cancelling a scheduled performance at Myth Live in Minnesota the night before the Super Bowl LII on February 3rd, and for allegedly not paying back a $150,000 advance for the show.

However, in legal documents obtained by music news site Pitchfork, Scott is claiming that PJAM never agreed upon a travel itinerary for the gig because it wasn’t able to pay for the transportation, as well as the remaining $50,000 of his $200,000 performance fee (though he did receive the advance, he confirmed).

The rapper cancelled a show in a Minneapolis Club on February 3rd, two days after he and Kylie Jenner welcomed their daughter.

Travis Scott has found himself the subject of a lawsuit after backing out of a pre-Super Bowl concert, just days following the birth of his daughter Stormi with his girlfriend Kylie Jenner.

The 25 year old rapper was hit with a lawsuit filed by entertainment event company PJAM last week, dated March 20th and seen by The Blast. It claims that Scott – real name Jacques Webster – was contractually obliged to perform at Myth Live nightclub in Minneapolis on the evening of February 3rd, the day before Super Bowl LII.

However, the filing states that, “despite his contractual obligations, [Scott] refused to show up for the event”.

By Charlotte Court in Lifestyle / Showbiz on 19 February 2018

The newest addition to the Kardashian/Jenner dynasty created a ‘storm’ when she arrived at the beginning of February along with an 11-minute video from famous mum, Kylie Jenner, to mark her birth. Now, new born Stormi Webster’s dad, rapper Travis Scott, has spoken out for the first time about his baby daughter.

New dad, Travis Scott has described his daughter as "beautiful"

The 25-year-old was asked by TMZ as he left nightclub, Poppy, on Saturday night how his baby girl was doing and the new-father replied: "She's beautiful!"

Scott accepted a plea deal from prosecutors, who dropped the more serious charges of inciting a riot and endangering the welfare of a minor, following the gig back in May 2017.

Rap star Travis Scott – the father of Kylie Jenner’s newborn baby – has reportedly pleaded guilty to disorderly conduct following an incident at one of his concerts in Arkansas last year in which he apparently incited the crowd to storm the stage.

Scott’s attorney confirmed to E! News and other outlets that his client accepted a plea deal from prosecutors back on January 12th, in which Scott pleaded guilty to disorderly conduct in return for the two more serious misdemeanour charges, of inciting a riot and endangering the welfare of a minor, being dropped.

Scott was ordered to pay $640 in court-associated costs, and paid out $6,825.31 to two persons who claimed they were injured at the concert back in May 2017.

Have Kylie Jenner And Travis Scott Broken Up?

By Charlotte Court in Lifestyle / Showbiz on 30 December 2017

The pair are expecting their first baby together in 2018

The next year is going to be a big one for the Kardashian-Jenner family with not one or two but three new arrivals with Khloe and Kylie pregnant and Kim expecting a new baby girl from a surrogate. However, rumours of turbulence have surfaced during the festive season for one of the three sisters.

Is the reality star going to be single mum?

According to Radar Online, 20-year-old Kylie’s boyfriend Travis has broken up with her saying he "just can’t do this".

Continue reading: Have Kylie Jenner And Travis Scott Broken Up?

By Stephanie Chase in Lifestyle / Showbiz on 28 December 2017

The 20-year-old, who has been keeping a low-profile in recent months, was first thought to have been absent from the annual family party, but photos have since emerged of her posing with boyfriend Travis and sister Khloe. In the photos, Kylie is only seen from the chest up, as fans still await pictures of her baby bump.

So How Does Kris Jenner Feel About Kylie's 'Pregnancy'?

By Stephanie Chase in Lifestyle / Showbiz on 24 September 2017

Is momager Kris seeing red or dollar signs, over the news that her youngest daughter is expecting her first child?

Kris Jenner has spoken for the first time since reports surfaced that her 20-year-old daughter Kylie was pregnant.

News of Kylie’s ‘pregnancy’ was first reported by TMZ on Friday evening, who cited multiple sources - but it’s yet to be officially confirmed by anyone in the Kardashian/Jenner camp.

But speaking to The Cut on Saturday, while front row at the Bottega Veneta show during Milian Fashion Week, Kardashian matriarch and momager of Kylie, Kris Jenner, neither confirmed nor denied the news.

Continue reading: So How Does Kris Jenner Feel About Kylie's 'Pregnancy'?

The release the video for 'Go Off'.

Lil Uzi Vert, Quavo and Travis Scott team up for a new track from 'The Fate of the Furious' soundtrack album 'Go Off', for which a video has now been released. It features footage of the trio rapping in clouds of smoke with cars surrounding them, interspersed with footage from the actual movie. 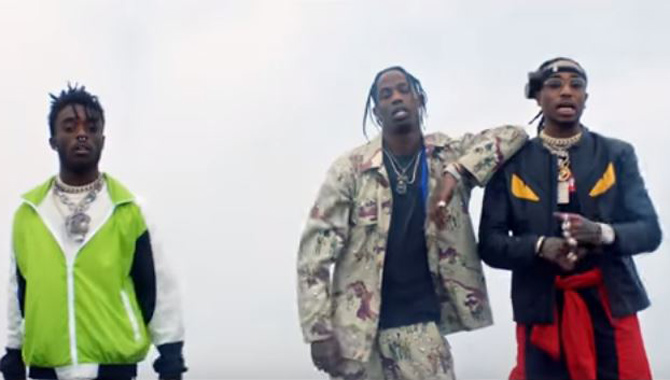 The track comes as Lil Uzi Vert prepares to unveil his fifth mixtape 'Luv Is Rage 2' later this year (following his recently released '1.5' EP), Travis Scott gets ready to launch third album 'AstroWorld', and comes after Quavo's band Migos' number one album 'Culture'. It marks Travis Scott's fourth time working with Quavo after 2015's 'Oh My Dis Side', 2016's 'Pick Up the Phone' and 'Champions', though he has worked with Migos as a whole on a number of occasions, including making a guest appearance on their number one single 'Bad and Boujee' which also featured Lil Uzi Vert.

Continue reading: Travis Scott Teams With Lil Uzi Vert And Quavo For New 'The Fate Of The Furious' Song

Travis Scott, who is supporting Drake on his Boy Meets World tour round the UK, fell through a hole in the stage in London this week.

Rap superstar Drake has offered to refund fans who attended his London gig this week after his support act, Travis Scott, fell through a hole on the stage.

The Canadian rapper, 30, made the promise after the incident which happened as he performed in front of tens of thousands of fans at the London O2 Arena on Wednesday night (February 1st), the second date on his Boy Meets World tour.

Drake had invited Travis Scott, 24, on to the stage to perform his single ‘Goosebumps’. As he bounded down the walkway, he suddenly disappeared down a hole in the stage that contained a huge globe that rises out from the floor as part of Drake’s stage show.