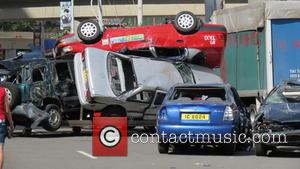 Picture: Transformers 4 film set - Detroit has been transformed into mini Tokyo as the movie, "Transformers 4" is in town filming. - Detroit, MI, United...

Police in Hong Kong are investigating a second extortion plot on the set of the latest installment of Transformers.

The cast and crew of Transformers: Age of Extinction are currently on location in the region and officials claim that on Tuesday (22Oct13) a female production staffer was setting up a shoot when four men "intimidated her and asked for money".

A 35-year-old man has since been arrested. Police are classing the case as blackmail and have directed the force's anti-Triad organised crime squad to oversee the investigation.

The latest incident comes a week after director Michael Bay was assaulted by a group of men, who also demanded payment for the "inconvenience" caused by filming.