The video for Secret VHS Collection was directed by Matthew Caron and Total Slacker frontman Tucker Rountree. With the whole video looking like it was amateurishly shot, we see the band performing at a raucous house party, mixed in between footage of a teenage girl who meets up with a smartly dressed man about her age, via Craigslist. The bright lights and colours fit in nicely with the laidback feel of the song.

Total Slacker is based in the New York suburb of Brooklyn. Emily (bass) and Ross (drums) went to school together in Santa Fe, while Tucker (vocals) grew up in Salt Lake City, Utah. They formed Total Slacker after meeting in Brooklyn in 2010. Ross is the younger brother of Zach Condon, who fronts Beirut. 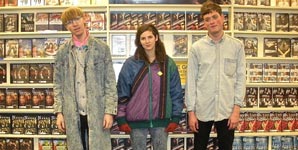