Tori Spelling found out she was pregnant whilst being treated in hospital for a migraine - despite having just given birth to daughter Hattie a month ago. 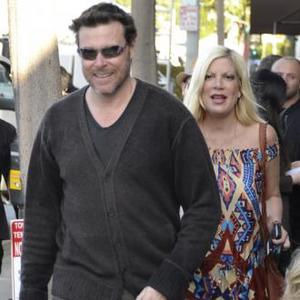 Tori Spelling found out she was pregnant while being treated for a migraine in hospital.

The 38-year-old actress had just given birth to baby Hattie, now five-months-old, when she and husband Dean McDermott discovered she was expecting a fourth child.

She explained: ''We found out the news together. I had chronic migraines and I was in the emergency room getting treated for one of my migraines and when I got there they said, 'Before we can treat you, you have to do the pee in the cup'. And I said 'Oh, don't worry I'm not pregnant. I just had a baby a month ago', and they [said], 'Sorry, it's policy at the hospital'.

But after a blood test confirmed the news, the couple - who also have Liam, five, and Stella, three - decided it must be fate.

She told Access Hollywood: ''Dean and I kind of sat there in shock for a while and then we said, 'Well, we wanted four ... This is when our miracle wanted to come so we'll take it'.''