Tori Spelling Stranded On Sidewalk As Car Breaks Down 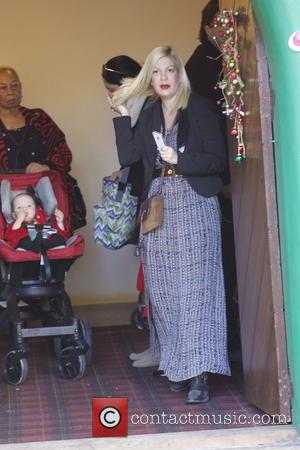 So you thought you just saw Tori Spelling stranded on the sidewalk, right? Well, it was probably her. The mother-of-four found herself in a sticky situation this week when her car started leaking gas before eventually packing in during a family road trip!

"4 kids. 1 dog. 1 car leaking gas broken down on the side of the road= not a great road trip," Spelling posted to Twitter on Wednesday (February 6, 2013), along with a photo of herself with kids Liam, 5, Stella, 4, Hattie, 1, and new baby Finn, who was born in August. It's not clear whether husband Dean McDermott was along for the road trip, though it's likely he was the one holding the camera. The snap is actually one of those classic family photos, with Tori pulling one of those "I've had it," faces which is mimicked by daughter Stella. Young Liam just looks bored with the whole situation and wants to get back into a moving vehicle as soon as possible, while baby Hattie doesn't really care what happens.

The kids looked much happier during their trip to the dentist earlier this week, which father Dean documented on his blog. "The kids go to my dentist, who happens to be the nicest guy in the world. The kids took to him in a heartbeat. He had them asking questions, checking out equipment and generally excited for what was to come," he said.