Tori Spelling's marriage is getting better

Tori Spelling and Dean McDermott ''are moving in the right direction'' following his one-night stand in December and they are much happier now. 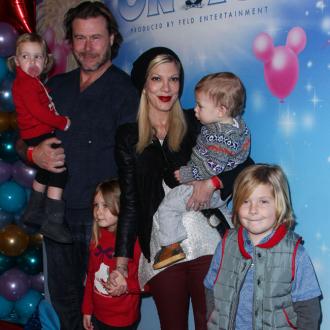 Tori Spelling and Dean McDermott ''are moving in the right direction.''

The couple, who documented their battle to save their seven-year-old marriage on their latest reality TV series, 'True Tori,' after Dean checked into rehab following a one-night stand with Emily Goodhand in Toronto, Canada in December, are still working on their relationship, but are much happier.

The 41-year-old actress told 'Good Morning America' on Wednesday (25.06.14): ''Things are getting better. You know, life is always a work in progress and our relationship is one as well, but we are moving in the right direction.''

The 'Mystery Girls' star has no regrets about airing their personal problems on TV, even though they have four children, Liam, seven, Stella, five, Hattie, two, and Finn, 22 months.

She said: ''Some people approved of it, some people didn't. It was my personal journey and I have no regrets.''

The former 'Beverly Hills 90210' star later echoed her comments on 'The View,' saying: ''I feel like all relationships are a work in progress and we're working on it right now. We're trying.''

A source previously revealed that Tori was eager to save her marriage for the sake of her children.

In April, the insider said: ''Tori doesn't want her kids to grow up without their dad in the house.''