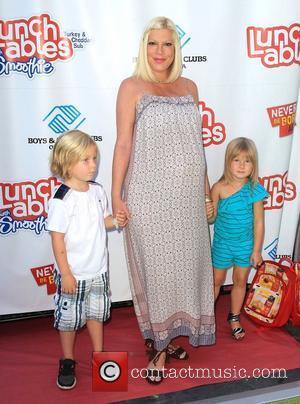 Tori Spelling is back in hospital, three weeks after giving birth to her fourth child. Unfortunately for the television star, the actress has suffered complications from her C-section.

The delivery of son Finn Davey – on August 30, 2012 – was Spelling’s fourth caesarean section and her second within a year. Daughter Hattie arrived last October, also by caesarean. A representative for the star told People magazine this week, “Tori underwent emergency surgery over the weekend due to complications from her c-section…She remains in the hospital and is resting comfortably”. The Craft Wars host, 39, and husband Dean McDermott are also parents to daughter Stella 4, and Liam, 5, as well as Jack, McDermott’s 13-year-old son from a previous marriage. Experts say that it’s not uncommon for women to have multiple C-sections, though that the procedure becomes more dangerous as the frequency of its increases. Dr Manny Alvarez, senior managing health editor of FoxNews.com, explained, “If there are short intervals in between, it can make the healing process more difficult”.

Around 30 per cent of new-borns in the United States are delivered by caesarean section. This means around 1.2 million C-sections are performed annually.