Tori Spelling feels guilty about missing the ''first year'' of her daughter Hattie's life because she was hospitalised with pregnancy complications from carrying her younger brother Finn. 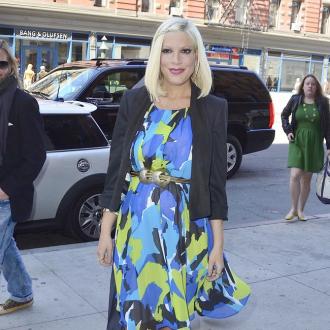 Tori Spelling ''missed the first year'' of her daughter's life.

The actress got pregnant again one month after giving birth to daughter Hattie and was forced to spend four months on bed rest in the hospital after being diagnosed with placenta pravia - which means the placenta covers the cervix and causes many complications including internal bleeding.

Although she gave birth to a healthy son Finn in August, Tori - who is married to Dean McDermott - was rushed to hospital three weeks later after her caesarean section scar burst open, leading to further time away from her kids.

She told People magazine: ''I feel most guilty about Hattie. I basically missed the first year of her life. I'll be trying to make it up to her forever. She spoke her first word 'dada' when I was away and she started crawling.

''She would visit but I couldn't hold her. I still can't because of my latest surgery. I haven't held her on my own since she was five months old. I'm constantly worried about what our relationship will be like. Even now if she falls it's Dean she reaches for not me. She doesn't even know me.''

Tori - who also has son Liam, five, and daughter Stella, four, with Dean - praised her husband for getting all their kids through the ordeal and being a rock to her.

She said: ''He was dealing with so much but he was always so positive. He would say 'I miss you. I want to be a husband and wife having fun together and being a family again.' That's what really affected me.''