Tori Spelling is constantly worried her husband Dean McDermott is cheating on her, even though he insists he has always been faithful. 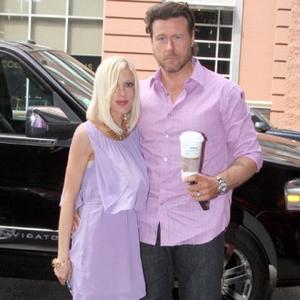 Tori Spelling always thinks her husband is cheating on her.

The actress - who met spouse Dean McDermott when he was still married - admits she can't control her jealousy and regularly thinks female callers to their home are sleeping with her partner.

She said: "We're a loving couple, but were human and definitely not perfect. Given our history I often get worried that Dean is going to cheat on me. If the phone rings and it's a girl's voice I have to ask if he's having an affair."

Tori - who has two children, Liam, three, and two-year-old Stella, with the actor - admits Dean constantly reassures her that he is faithful, and though she believes him, she can't stop herself from making the accusations.

She added to People magazine: "Dean has never been anything but devoted, and he tells me over and over again that he would never do that. Deep down I believe him. But I can't stop myself. For some reason I'm compelled to accuse him of cheating.

"I apologise to Dean constantly and it drives him crazy and rightfully so."