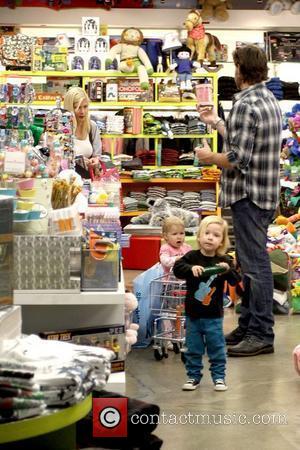 The cracks are starting to show in Tori Spelling and Dean McDermott's marriage - if screenings of their upcoming reality TV show are anything to go by.
U.S. magazine Life & Style has obtained footage from the new season of Tori & Dean: Home Sweet Hollywood - and reports suggest the couple is in trouble.
The publication editors reveal the pair's "once-cosy relationship is now filled with tears, tension and screaming matches".
In one tense encounter, the actor asks the former Beverly Hills, 90210 star, "What changed with me?" prompting his frustrated wife to respond, "It's like you got more and more unhappy and angry. I just want the old Dean back. I really do. I miss you so much."
MCDermott admits he isn't the attentive man Spelling married, according to Life & Style, and he has become consumed by an obsession with motorcycle racing, leaving his wife and kids to spend hours speeding around California's Auto Club Speedway several days a week.
On the show, he confesses, "I'm not present as a father and a husband."