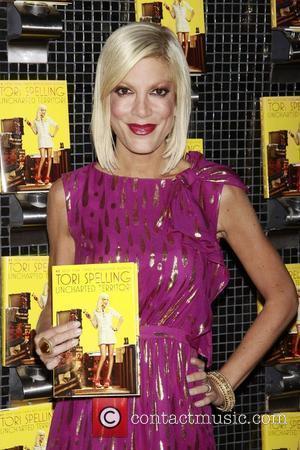 Tori Spelling fell out with her BEVERLY HILLS, 90210 pals after marrying second husband Dean McDermott - insisting her former co-stars now "hate" her.
The actress shot to fame with a role in her dad's hit high school TV drama alongside Jason Priestley, Shannen Doherty,
Jennie Garth, Luke Perry and Tiffani Thiessen.
Spelling remained close to the cast after the series went off the air in 2000 and even invited them to be guests at her first wedding to Charlie Shanian in 2004.
However, the star lost contact with most of her ex-colleagues after she fell in love with MCDermott and subsequently called off her relationship with Shanian.
She tells Ryan Seacrest's KIIS-FM radio show, "All my 90210 cast members hate me! Jennie and I are still friends. (Thiessen)... doesn't talk to me anymore.
"We were all great friends during 90210, we were friends after 90210 and they all came to my first wedding. All of a sudden I marry Dean and I don't know what happened. I lost all my cast members."