Fact: Christine Fox, the woman who inspired Kelly McGillis' character in Top Gun, has been appointed Acting U.S. Deputy Defense Secretary. The top analyst took over the new position on Wednesday (04Dec13), becoming the highest-ranking woman ever to serve in the Pentagon.

Quote: "I was 25 when I played Iceman, and I still get recognised for that character a lot... It's flattering. I have happy memories of Top Gun. It's fun to see my younger self." Val Kilmer on his high-flying memories of making Top Gun with Tom Cruise.

Quote: "I don't know why they picked me for that. I totally felt wrong from the get-go. I look at that movie and I think I look uncomfortable throughout. I kept getting notes about my height and I spent the whole movie trying to shrink. (But) Tom didn't have a problem with my height." Kelly McGillis towered over Tom Cruise while filming Top Gun.

Quote: "We have been talking with Tom, definitely." Director Tony Scott confirms Tom Cruise is in negotiations to join the cast of the upcoming Top Gun sequel.

Quote: "When Top Gun came out my sisters were like, 'Oh, my God, Top Gun! Tom Cruise!' And I very confidently said, 'I'm going to marry him one day.' It wasn't like, 'How do I get Tom Cruise?' It was just: 'I think I'm going to marry him.' Why not? He'll like me. I'm fun." Katie Holmes on her superstar husband.

Fact: Tom Cruise and Katie Holmes are renting out the New York apartment the Top Gun star bought with the money he made from his big break, Risky Business.

Quote: "There's always someone telling you not to make a movie. When I did Born on the Fourth of July, they said, 'This is going to ruin your career. What are you doing...? There were people who didn't want me to make Top Gun." Tom Cruise is glad he doesn't listen to his advisors.

Quote: "I love Top Gun. It has to be my favourite. MAVERICK sitting in the same room is pretty weird." Victoria Beckham on her friendship with Hollywood star Tom Cruise.

Quote: "Watch Top Gun. Follow it exactly." Fall Out Boy star Pete Wentz explains how he got the inspiration to make a move on his pop star girlfriend Ashlee Simpson - by copying Tom Cruise's efforts to win over Kelly McGillis in Top Gun.

Fact: Kelly McGillis, the sexy actress-turned-restaurateur who romanced Tom Cruise in movie classic Top Gun, has signed on to play a lesbian in TV series THE L WORD.

Quote: "I had them on by mistake and the production team thought it looked cool." Hollywood star Tom Cruise remembers starting the aviator sunglasses craze in 1986 film Top Gun.

Quote: <p>"I think there's 42 shower scenes in that movie. There's one girl and a lot of slapping." Val Kilmer jokes that Top Gun is a gay movie. </p> 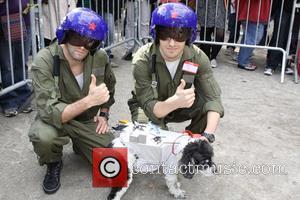