Continue reading: Gwen Stefani Has Only Ever Had Two Boyfriends

Not Looking So Hot Now: No Doubt Apologise To Native Americans For Pop Video

No Doubt have been forced to apologise to the Native American community after offending some of its members with their latest pop video. No Doubt – who are fronted by Gwen Stefani – released the video for ‘Looking Hot’ on Friday (November 5, 2012), which, according to Reuters, featured Gwen dressed in traditional native garments, dressed as a Native Indian Princess. They have been accused of trivializing the culture of Native Americans.

In the video, drummer Adrian Young and guitarist Tom Dumont are dressed as cowboys and capture Stefani, though she is rescued by bass player Tony Kanal, who plays a tribal chief. In a statement, the band have apologised, saying their intention was “never to offend, hurt or trivialize” the Native American culture. They added “As a multi-racial band our foundation is built upon both diversity and consideration for other cultures. Our intention with our new video was never to offend, hurt or trivialize Native American people, their culture or their history… Although we consulted with Native American friends and Native American studies experts at the University of California, we realize now that we have offended people ... We sincerely apologize to the Native American community and anyone else offended by this video.”

‘Looking Hot’ is the second single to be released from No Doubt’s latest album release, Push and Shove. It’s the band’s first album release in a decade.

This week, No Doubt release their sixth studio album, Push and Shove. Their lead singer Gwen Stefani may have soldiered on into a new millennium with her solo material but her band seem content to revisit the sights and sounds of the 1990s – the decade when they made their name. In an interview with The Guardian, Stefani insists that her solo records were “never meant to be taken seriously” and the band seem to be re-treading old ground with their new material, even with forward-thinking producer Diplo at the helm in the studio.

In the video for the first new single from No Doubt, ‘Settle Down,’ Stefani wears a black vest with a visible bra, bold shiny trousers and a giant watch: “To original fans it will prompt nostalgia, to new ones…it will probably look like a very on-trend 90s fashion revival.” Gwen insists that it “feels so much more natural being back in this mode” and she has fixed the broken relationship that she had with songwriting partner Tony Kanal (whom she used to date).

That return to the band’s trademark sound will please hardened fans of the band but may prove to be a sticking point for those who have fallen by the wayside. Andy Gill of The Independent states that the band have “only the most tentative divergences from previously tried  and tested strategies, which gives Push and Shove a character that could be described as either dated or timeless.” A return to form, though is a good thing for Entertainment Weekly, who write “Gwen Stefani pogos as hard as she ever did in her Anaheim-strip-mall ska days. But she's also just as neurotic, which adds depth to her love songs.” 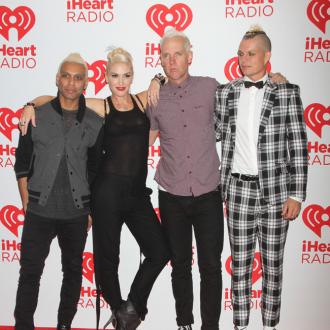 Fred Perry team up with No Doubt