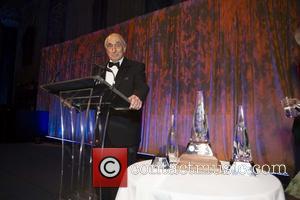 Veteran crooner Tony Bennett mingled with the cream of Hollywood from John Travolta to Sidney Poitier at his birthday party in California on Saturday night (03Aug13).

The singer turned 87 on Saturday and he was the guest of honour at a glitzy bash in Beverly Hills that night which also served as a fundraiser for his Exploring the Arts (Eta) charity, which promotes creative arts programs in American schools.

Travolta and Poitier were among the guests, along with Queen Latifah, Eliza Dushku and Vince Vaughn, who attended with his heavily pregnant wife Kyla Weber.

During the evening, Bennett was presented with an elaborate birthday cake.

The event came a day after the music legend performed a massive gig at the Hollywood Bowl in Los Angeles on Friday (02Aug13). The concert was turned into a birthday celebration by Bennett's daughter Antonia, who led the audience in a rendition of Happy Birthday and presented a huge white cake to the star on stage.