Lady GaGa And Michael Buble Honoured The Recipients Of The Songwriters Hall Of Fame Awards By Performing Covers Of Their Hit Songs On Thursday Night (18jun15). 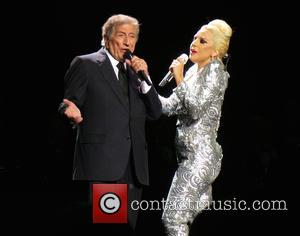 The Poker Face hitmaker was among the honourees at the New York City ceremony, picking up the inaugural Contemporary Icon Award from her jazz partner Tony Bennett, while she later took to the stage to fete songwriter Linda Perry by singing her track What's Up?

Gaga later wrote on Instagram.com, "Being a songwriter is first and foremost how I identify in life. Tonight's award means a lot to me."

During the show at the Marriott Marquis Hotel in Manhattan, Buble honoured Van Morrison with a performance of Moondance and the Canadian crooner also presented him with the prestigious Johnny Mercer Award for songwriting excellence, while Nate Reuss was feted with the Hal David Starlight Award for young songwriters.

Other performers included Carly Rae Jepsen, who sang Time After Time by Cyndi Lauper, and U.S. talk show host Stephen Colbert, who sang As Good As I Once Was by country star Toby Keith.