Sixty years after his first number one single and at the ripe old age of 85 (!) Tony Bennett returns to the music scene with his second set of duets. The man with as many comebacks as Grammy Awards looks set to take the charts by storm again on both sides of the Atlantic, and considering this album is number one on the American Billboard 200 whilst this review is being written, it safe to say he's done it again. 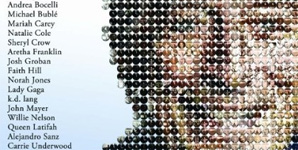 The range of supporting artists spreads wide across the musical spectrum, with the likes of Lady Gaga, Aretha Franklin and Alejandro Sanz making appearances on the album, not only flexing their own talents but Bennett's own, still impressive capacity. Lets get things straight for those that may be doubting Bennett's prowess upon the microphone, thinking he may play second fiddle to the impressive back up, he's definitely still got it.

This type of album is one that you'd probably expect to see released around December time, in the attempt to cash in on the mad rush to get Mum or Dad a gift they may actually enjoy, but with the untimely passing of Amy Winehouse, perhaps now is the best time for release, to show the public that despite what may have occurred in her personal life, she was a phenomenal talent that could work perfectly in whatever style she was place in.

'Body and Soul' could hardly be a more fitting choice for Tony to choose as the song to croon along to with Winehouse. Her rich voice accompanies Bennett and the lounge-room orchestration perfectly; the poignancy of her singing: "It looks like the ending/ Unless I could have one more chance before I die" is more moving than it could have ever meant to have been and the mixture of talent and heart-rending appropriateness on one track is almost overwhelming. From this track alone it's safe to say that the music scene will miss Amy Winehouse greatly. The album then smartly moves on to a signature Bennett tune, with the big-band jazz number 'Don't Get Around Much Anymore', in which he duets with an obvious candidate in Michael BublÃ©. Here Bennett sounds right at home and BublÃ© doesn't do a bad job a keeping up with the old master.

Whilst the album does have its fair share of obvious choices for supporting acts, with Michael Buble and the likes of Josh Groban, Andrea Bocelli and k.d Lang featuring, it is the more unexpected choices that really do impress. The opening number 'The Lady is a Tramp', which features Lady Gaga of all people, kicks off the album perfectly and it is delivered in a typically sassy style by Gaga, in such a way that it really does sound as though the two of them are having tremendous fun recording the song, appropriately so as it is a terrifically entertaining listen.

Willie Nelson stretches himself not so much vocally, rather musically on the swinging 'On the Sunny Side of the Road'. The two veterans mix singing styles impeccably, with Bennett's smooth, relaxed and from the heart crooning style going side by side nicely with Nelson's own relaxed, country style.

This is a genuinely enjoyable and listenable album, filled with the occasional surprise in terms of stylistic qualities both musically and vocally. Obviously, with such an established and well-managed act like Tony Bennett it would be a surprise if it did go on to dishearten longtime fans and disappoint those who have stumbled upon the living legend for the first time. In the same vein as recent resurgences from the likes of Rod Stewart and Johnny Cash, the old boys still show us how it's done and none so well as Bennedetto.