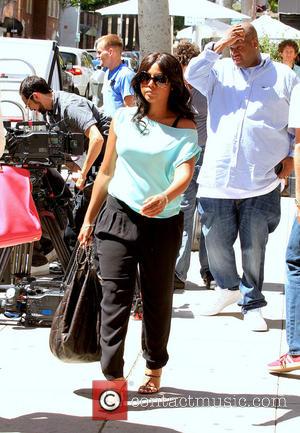 The singer was performing in New Jersey when her sexy silver mini-dress started to unravel while she danced with a male fan she had invited to join her in the spotlight.

At first the back of the dress drooped, revealing Braxton's thonged backside, and it quickly became apparent she might lose the outfit altogether.

She says, "All of a sudden the whole dress starts to fall apart and then I knew was in trouble: 'Ok, something's going on here...'"

The fan the Un-Break My Heart singer was dancing with gave her his jacket to help her cover up as an assistant rushed onstage and helped Braxton wriggle out of the dress, which she insists she'll never wear again.

Ever the professional, the star continued with the show after flashing the audience a glimpse of the body suit she was wearing under the dress.

She adds, "I had to let them know that I wasn't completely naked."